DYING TO BE THIN – Contd

THE SCARY TRUTH BEHIND ANOREXIA AND BULIMIA NERVOSA

Today health experts have discovered that young African females in the are starving themselves intentionally [anorexia nervosa], other women are bingeing and purging {bulimia nervosa} on the campus of historical African universities, while many in corporate Nigeria are crash dieting and abusing laxatives in a dangerous, sometimes deadly attempt to control their weight. But why are African women killing themselves to be thin? What’s behind the deadly cycle of eating disorders that is quietly engulfing some in the African society?

For starters black women are no longer generally celebrated for their curves, some experts argue that for every beautiful and curvaceous Queen Latifah heralded as a standard of beauty on TV, there is at least 100 thin Jennifer Anistons, there is a growing trend of eating disorders in African girls and this is going to continue as the African culture becomes more immersed in the white European cultural values, today, it’s extremely difficult for an African girl to be insulated within the African community, so that she is not affected by the dominant society, everywhere she turns to uplifts the western culture, their so called standard of beauty, it gradually gets into her subconscious and she wants to look like the stars she sees on television.

Recent studies have shown that some sisters, commonly considered to be overachievers, are more likely to develop an eating disorder than others because of their constant quest for perfection, other sisters are plunged into eating disorders by constant dieting, according to eating disorder specialist Shikana Temille Porter, PH.D, Director of Psychology Training at St John’s Child and Family Development Center in California “every eating disorder can be traced back to a diet” Dr Porter argues “the whole diet mentality, looking to alter your body because you are trying to fit into the thin cultural ideal within the society will cause you to restrict your eating, take diet pills and laxatives and throw up, this causes havoc in your whole body system and even death”

Eating disorder can also be caused by life’s stressors and emotional trauma or tragic events, on the black living online website, Kimberly 29, says she quickly descended into a bout of anorexia after being date raped, Kimberly writes that she believed having a curvaceous body attracted the rapist, so she was determined to change her physique. “if I didn’t get rid of those curves, some boy or man was going to rape me again” she writes “I started taking over the counter diet pills, eating less and exercising more, my curves finally disappeared but my drive to keep the weight off stayed, I was obsessed with losing weight and not getting raped again, but my body was tired of the abuse, by this time, anorexia had taken over me. Kimberly also slipped into bulimia, she consumed large amount of food and then purge herself by ingesting ipecac syrup {commonly used as an emergency treatment for certain kinds of poisoning or drug overdose} to induce vomiting, as if bingeing and purging are not hazardous enough, adding ipecac syrup is especially deadly “ ipecac is hard on the heart and it weakened my heart muscles when I abused it” says Damilola Bada, an Oxford university student “I had a minor heart attack when I was 19” as with most people who starve and purge themselves regularly, Bada’s health problems are numerous “my teeth enamel is worn away {as a result of the } vomiting, and I have several teeth that are completely decayed” I also have intestinal problems; I must take medication in order to have a bowel movement.” Other health problems associated with eating disorders include malnutrition, dehydration, stomach ruptures, esophagus tears, serious heart issues and death.

Psychological effects include, low self esteem, feelings of guilt and shame and depression. Not everybody was lucky like Damilola and Kimberly, some people lost the battle and died from heart attack.

THE ROAD TO RECOVERY
Recovering from an eating disorder entails at least three important steps:
1) Seeking professional counseling to address the underlying emotional or psychological issues that may lead to the use of food as a coping mechanism;
2) Seeking medical treatment to address the physical damage and to receive instructions on a healthy lifestyle and eating plan; and
3) Finding adequate support system to achieve and maintain a healthy and realistic body image.

Mothers, educate yourself on the signs of eating disorders, because it is more common in teenagers who are trying to look like their icons on TV, and there is a belief that African women are not prone to this disease, which in fact is a lie, there are a lot of African women out there suffering because they feel like they are not supposed to have this disorder; because it is a white girl aliment. Get involved quickly if you suspect a loved one may be afflicted by an eating disorder, sisters must refrain from judging their self-worth based on their dress size, strive for a healthy body acceptance and body esteem
Adopt healthy lifestyle practices, such as exercising and making healthy nutritional choices, that are life affirming and life sustaining.

Take care of your bodies

6 Must Haves for New Makeup Users 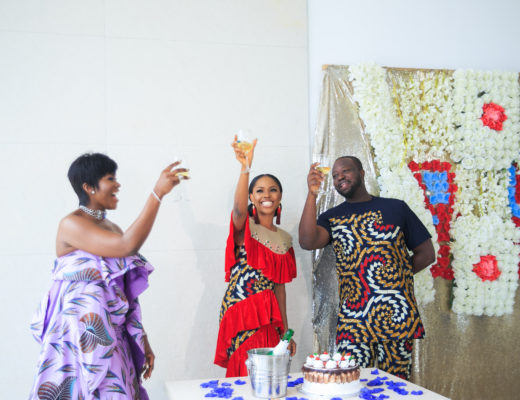